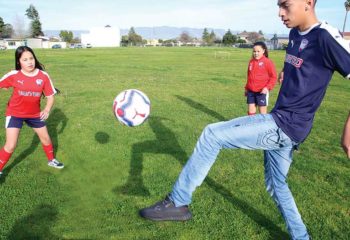 Community teams up to update field, push for soccer complex

By: TODD GUILD / The Pajaronian

The aging sports field at Freedom Elementary School is so cratered by gopher holes and waterlogged by winter weather that some students don’t bother playing on it.

Those that do risk sodden shoes and twisted ankles.

This is set to change soon.

Under an agreement forged Jan. 22 between the Pajaro Valley Unified School District Board of Trustees and Pajaro Valley Sports Foundation (PVSF), the school’s field will get a complete renovation.

The end result will be a full-sized soccer field that can double as two youth-sized fields, along with separate youth peewee fields.

The work will include removing the old grass, leveling the playing surface, repairing and adjusting the irrigation system and installing a perimeter fence and nets to protect neighbors’ homes.

See the agreement at bit.ly/38OH2Ej.

Under the 10-year agreement, PVUSC will perform maintenance, clean the field and pay a portion of the utilities.

In exchange, soccer teams throughout South County would use the field after school hours and on weekends.

That should come as good news in a community where soccer is lifeblood, and many young people play the game as soon as they can walk.

Organizers say that some 64 adult soccer teams play in South County, along with four competitive clubs and two recreational programs.

“PV United soccer teams have used the field for the past 10-plus years when it’s been playable,” said PVUSC member Lilliana Diaz. “This gives us a home field we can rely on for scheduling games.”

The proposal garnered unanimous approval by the school board. Trustee Georgia Acosta was absent.

Work on the field is expected to start soon, but organizers are now turning to the community to help pay for the rest, said Rotary Club member John Skinner.

“I would like to have the field playable when school starts in the fall,” he said.

Jennifer Watson, who describes herself as a soccer mom, said she was inspired to get involved in the project after seeing the positive impact of sports on her family.

Watson is also a founding member of PVSF, which was established in 2017 to create sports facilities for young people.

“I’ve seen first-hand what sports can do for a child,” she said. “It gives them a sense of accomplishment that only being on a team can give them.”

The ultimate goal of the foundation, Watson said, is to create a giant sports complex that would allow for a multitude of sports.

In the meantime, the organization plans on creating – or improving – a number of smaller fields throughout South County like the one at Freedom Elementary, where principal Gloria Puga expressed her excitement at the project.

Freedom’s field project – and PVSF – were launched when Gina Castañeda, who runs Aztecas Soccer Club, spoke to Watsonville Rotary Club about the community’s need for activities for young people.

Castañeda also works as a Santa Cruz County probation officer. She created Aztecas 11 years ago with the philosophy that keeping young people engaged in “pro-social” activities such as sports keeps them out of trouble and in school.

And the need for such programs here is dire, Castañeda said. Of the 184 young people currently on probation, 107 live in South County.

“By creating safe spaces, you create opportunities for youth for engagement,” she said. “Participating in sports connects young people with mentors, a pro-social activity and structured supervision. We need more sports activities and safe spaces for our youth.”

Pajaro Valley United player Jasmine Quiñones, 11, said she currently practices in Soccer Central in Ramsay Park. But she prefers the fresh air that comes from playing outdoors. In addition to staying fit and competing in a game she loves, she said that soccer has an additional benefit.

“You get a break from electronics,” she said. “It’s a way to have fun with your friends.”

Roman Acosta, 14, plays on PV United, and is also one of 18 elite players on the Cal North Olympic Development Program.

He agrees that South County is sorely in need of places for young people to practice.

“I’m excited that the new field will be available to train and play on the weekends,” he said.

Trustee Maria Orozco said that the area in which Freedom Elementary is located lacks both parks and open space for children to play.

“As a trustee for this school I recognize the dire need for parks and open space for youth and families to convene, especially in the Freedom and Airport area,” she said.

“This is something that is so desperately needed in our area,” she said. “Children really need open spaces, safe places to play, and adult mentors they can look up to and trust.”